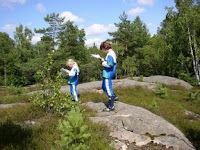 The Irish Orienteer Guide to Some Major, some minor,
and Some Holiday Events for 2008

It’s the time to plan your orienteering year: do you stay at home and do just the small local events, or take in the major national competitions like the provincial and Irish Championships and the Inishbofin 3-Day, or is this the year to go for something more exotic? If you don’t want to go too far, the Welsh 6-Day in August might appeal; otherwise, how about Scandinavia, Italy or France? We are becoming more adventurous in our orienteering choices – Jean O’Neill’s article to follow on her experiences in the Czech Republic – so have a look around and see what you can manage. Some of our elite Juniors recently went to Sweden for an intensive O-weekend, so there are lots of opportunities.
Even if you don’t travel far, there’s plenty of orienteering at home. How many events in Ireland is it possible to do in one year, I wonder? Now there’s a challenge!

In January there’s orienteering in Madeira (23-25).
Portugal will be popular this year in the lead up to the World Masters (over 35) Championships (WMOC) in June. You can kick off with the Portugal O-meeting near Faro on 2-5 February 205 (pom2008.com). This is followed a week later by an international and World Ranking event at Cantahede (Feb 8-10) on terrain similar to WMOC. (Look at Sun-O.com for orienteering packages in Spain and Portugal).
At the end of the month the Mediterranean Open Championships are at Bari in southern Italy with training and two more events on March 8-9.

In March, Portugal also features with the National Championships east of Lisbon on 6th-9th . In neighbouring Spain the 21st Martin Kronlund Trophy is near Madrid the weekend before Easter (14-16th) and the 20th Murcia Trophy in southern Spain at Easter. Closer to home, JK2008 south of London offers a sprint, two days individual and relay (jk2008.org) at Easter, while the usual Czech Easter 3-day event is at Cezka Lipa, north of Prague. In SW France there’s also a 3-day in the Dordogne, based at Cadouin. After Easter some of our younger enthusiasts are heading to the Spring Cup near Hillerod in Denmark from March 28 to 30.

April starts with the Leinster Championships on the 6th at Fair Mountain, west of the Wicklow Gap, run by Setanta Orienteers. The British Championships on April 19-20 are at Culbin, on the Moray coast of Scotland, are on a forested sand dune area used for the 1976 World Championships. An adjacent forest featured in last year’s Scottish 6-Day and was a superb orienteering area. (boc2008.co.uk). Training in Latvia in preparation for the European Championships runs from 5th to 13th April, with a WRE on 5th-6th (eoc2008.lv).

May starts the island hopping with the Irish Championships on Bere Island, Co. Cork, run by Cork Orienteers on the 3rd-5th. The format is Day 1 classic; Day 2 relay; Day 3 middle distance. The World Championships training camp in Moravia in the Czech Republic runs from May 1-4 and includes the Czech Spring 4-Day.

Continue island-hopping with the Irish 3-Day on Inisbofin from May 31 to June 2, perhaps confusingly called the Irish Three Day Orienteering Championships. In June the famous Jukola 7-person relay runs its 60th time through the night of June 14-15 near Tampere in Finland. Ryanair fly there from Dublin …

July is peak season for multi-day international events, with the Swedish 5-day O-Ringen in Dalarna in southern Sweden from 21st to 25th clocking up 11,500 entries by early January. Hungary has the Hungaria Kupa from 2nd-6th , Holland has the Holland OL 5-days at Breda (7th – 11th), Norway has the Sorlandsgaloppen near Ryanair’s Kristiansand (7th – 13th) and also the Nordvestgaloppen near Voss from July 30 to August 3rd; the World Championships in Moravia, Czech Republic, have spectator races open to all as well as Trail-O from 10th – 20th July.
Also in July, the Finnish 5-Day, Fin 5, is at Saarijarvi in central Finland on July 14 – 18.

August has two 6-days, the 6-Jours de l’Aveyron, near Millau in SE France, where it looks like the entrants get a “free” O-top from Noname, and Croeso 2008 in Wales. Both areas will feature open limestone type terrain, so it may be trade-off between convenient access and probable better weather for camping.

Heading for Autumn we have the Northern Ireland Championships and Veteran Home International in Northern Ireland on 4th-5th October, with the individual on the excellent Magilligan sand dunes in Co. Derry and the Relay in Co. Antrim.

There’s actually a great international orienteering calendar on-line at cal.worldofo.com which fills in lots of the gaps in the TIO listing. Go and have a look, and don’t forget to write about your experiences for us when you come back!